the fujoshi reads…
in Lucky Star by Kagami Yoshimizu

Every group has own verbal shorthand, and fujoshi, fudanshi, and otaku are no exception. For those new to yaoi, it can be frustrating when you see words like noncon, tachi, bara, reversi, and shotacon being tossed around.

I wish I could say this is a definitive guide to yaoi definitions, but, well, I’m sure it’s not. I hope, though, that this list will be useful as you wander through Yaoiland. The list also includes terms not exclusive to yaoi but that turn up often enough in manga and anime fandoms that they’re useful to know.

If you notice any mistakes or any jargon I’ve left out, or if you have any alternative definitions that you’d like to put forward, please do speak up in the comments section!

There is no real consensus on the definition of these terms — in fact, there are a lot of arguments about the “best” or “right” definitions; I can only tell you that this is how I will be using these words (generally) on this site. 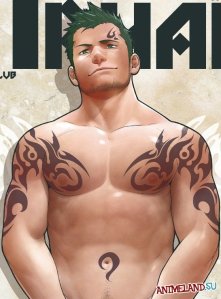 a bit of bara…
Priapus by Mentaiko

boys’ Love (BL) — stories that feature romance or sexual relationships between men, typically written by women and marketed to a primarily female audience. This is an umbrella category for both shounen-ai and yaoi. For more on BL as a genre, see begin at the beginning: what is yaoi?

shounen-ai — stories that feature romance (or the desire for romance) between men, but either nothing sexual happens or little more than making out is shown (even if they might be having sex behind the scenes)

shotacon (shota) — stories that feature adults in romantic or sexual relationships with underage boys. Some people define shota as any relationship between an adult and a minor. While I believe this is appropriate in real life, in yaoi this term is more frequently used to refer to preadolescents being portrayed in sexual situations (people argue about what age is “preadolescent”, but it’s usually defined as somewhere between 12-14).

yaoi — stories where male characters are shown having any form of sexual contact that can lead to orgasm (even if you only catch a glimpse). The term “yaoi” comes from “Yama nashi, ochi nashi, imi nashi” (“No climax, no fall, no meaning”); in other words, if there’s no sex, what’s the point? Well, that’s one interpretation. I’ve also seen the phrase translated as “without climax, punch line, or meaning,” which would be a more self-deprecating statement about the manga having nothing to offer except the sex (probably meant either ironically or sarcastically). Some fujoshi have come up with a funnier version: “Yamete, oshiriga itai!” (“Stop, my butt hurts!”). Sexual contact in yaoi may or may not be consensual, but usually noncon sexual activity is romanticized, often as a precursor to love (no matter how unrealistic that progression is, that’s currently the genre’s standard trope).

I know that sounded all cut and dry, but here’s the thing — I’m also prone to use yaoi as an umbrella category, interchangeable with BL. Sorry about that. 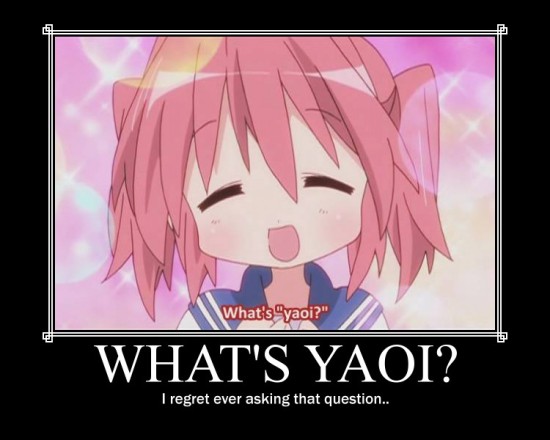 ____x____ (ie- boyxboy, SamxDean, HaruxMakoto) — the x indicates that the two people (or whatever) are being portrayed in a romantic/sexual relationship

animix — an “almost anime” in which the only thing that’s consistently animated is characters’ mouths. Effects such as panning and adjusting lighting are used to make the picture look more dynamic.

canon — used in opposition to shipping, refers to a pairing that is part of the official manga/anime, a “real” couple you actually see being a couple in the published/broadcast story. Canon comes from “canonical”, something that is considered authoritative or genuine, especially in terms of literature.

cosplay (in manga, not IRL) — in yaoi, cosplay usually refers to dressing up in costumes intended to sexually excite one’s partner (the naked apron and cat ears with, um, inserted tail are both quite popular).

crack pairing/ship — an extreme form of shipping, referring to impossible pairings, such as characters who hate each other or characters from unrelated stories. Pairings that are impossibly at odds with canon. The term comes from the idea that you’d have to be “on crack” to support them.

ero — from “eros” — referring to sexual love or desire, similar to ecchi

doujinshi/doujin/dj’s — self-published manga, whether original or based on others’ stories. In yaoi these often involve shipping characters from non-yaoi stories (see “ship”, below).

drama CD — audio performance of a manga’s story; yes, in yaoi that includes the sex scenes (headphones on, folks).

fujoshi — translates as “rotten girl” — for female fans of BL

host club — a bar where one pays by the hour to be fawned over by male “hosts” — the illusion of romance and sexual attraction are sold, as are very expensive drinks (there are also hostess clubs); some host clubs expect hosts to accompany clients outside of club hours, which may or may not include sex.

IRL – in real life (as opposed to online)

one of the most famous yaoi light novels translated into English: Ai no Kusabi by Rieko Yoshihara

light novels — stories in the form of short novels, usually published as series, rather than single volume stories (although yaoi novels are frequently single volumes). Mangaka artists are hired to create whole-page illustrations that are scattered throughout the book; in yaoi light novels, they usually depict sex scenes.

lolicon (loli) — an adult who is sexually interested in underage girls (comes from Lolita, a famous novel of the same theme)

miai (omiai) — an arranged-marriage meeting between a man and woman, usually also attended by the families (and possibly a go-between or matchmaker for the families), with the intent of initiating a relationship that will lead to marriage

neko – literally means “cat” but is used to mean the bottom (or catcher) in boyxboy sex (which leads to a lot of word play, see the image at the bottom of the page); is seen as the submissive/feminine partner and is usually paired with the masculine “tachi”; can be used interchangeably with “uke”. Note: these are yaoi’s definitions, and do not necessarily reflect how these words are used IRL.

one-shot — a single chapter, stand-alone story (in yaoi, the term includes a sexual pun about something that happens at least once per chapter; I leave it to you to figure it out)

OTP — “one true pairing” — a term used in shipping, referring to a fan’s favorite shipped pairing, the one they prefer over all others. For example, in Free!, fans often favor (and argue about) HaruxMakoto versus HaruxRin as their OTP.

reversible characters (reversi or reba) — characters that can be either seme or uke; most often in yaoi, they’re seme with one partner but uke with another.

scanlation — the process of scanning the hard copies of manga, using photoshop to remove dialogue (and often sound effects) from the page, translating the text, and then inserting the translated text back into the images.

scanlators — manga-lovers who donate their time to scan the hard copies of manga, use photoshop to remove dialogue (and often sound effects) from the page, translate the text, and then insert the translated text back into the images. Hey, it’s a lot of work, so it’s worth describing the process twice…

seme — the dominant partner in a homosexual relationship; the top (or pitcher) in boyxboy sex; typically seen as the masculine partner, paired with feminine “uke”; literally translates as “attack”; essentially the same as “tachi”. Note: these are yaoi’s definitions, and do not necessarily reflect how these words are used IRL.

ship — as in relationship, used as a verb when fans put two characters together in a relationship (who aren’t in one in the original story).

shotacon (shota) — adults who are sexually interested in underage boys

soaplands — establishments that circumvent anti-prostitution laws by having women “wash” men (typically in lubricant) and then rub them to climax, often with full body contact (but without penetration)

sumata — a substitute for penetration, in which the male (or seme) thrusts between his partner’s pressed-together thighs (typically because the uke is unwilling to, um, receive him)

tankoubon (tank) — a book that collects individual chapters of manga into a volume; it typically contains chapters previously published in manga magazines; sometimes tanks are one-shot collections, either by a single mangaka or by multiple authors on a central theme, or they gather together the chapters of a mangaka’s story (that has been published serially over time)

tsundere — a character who seems cold and/or gets angry easily (typically because he’s easily embarrassed), but is actually a softy inside

uke — the submissive partner in a homosexual relationship, the bottom (or catcher) in boyxboy sex; translates as “to receive” or “defense”; typically seen as the feminine partner, usually paired with the masculine “seme” — used interchangeably with “neko”. Note: these are yaoi’s definitions, and do not necessarily reflect how these words are used IRL.

22 thoughts on “the jargon of yaoi: a guide to fujoshi slang”

a blast from the past… Black Butler’s yaoi fanservice:

(Nothing, um, juicy is actually happening here, but the clip's whole point is to give ya' the wrong idea... Does that make it NSFW?)