As I mentioned in the blog and I, my manga reading and anime watching tend to lead to Japanese-food cooking, which I guess is now leading to yaoi-food blogging.

The cooking piece of the process usually starts out with a way-too-enthusiastic recipe search. I’ve accumulated an embarrassingly large collection of recipes. Over the years, I’ve settled on a few favorite recipe sites, and I thought I’d list them for you, in case you happen to find yourself in a manga-inspired cooking mood, sans recipe.

The Just Hungry blog has been around since 2003. It’s written by Makiko Itoh, who goes by Maki. Although she was born in Tokyo, Maki-san has lived in a variety of places around the world, most recently in France. As someone who has had to figure out how to make homestyle food when she’s far, far from the grocery stores of home, Maki-san writes recipes that balance authenticity with international practicality (useful for those of us who don’t have access to the many convenience products that are hard to find outside of Japan).

As you might expect, after 11 years of blogging, she has an extensive recipe stash, so when I go to her site I tend to find what I’m looking for. Maki-san generally makes her recipes very straightforward and easy to follow — even when you’re dealing with a dish or ingredient that’s completely new, she makes it approachable. Usually the recipes I get from her turn out well. 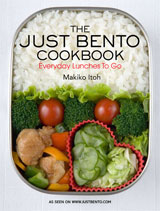 Like many latecomers, I found Maki-san through her published cookbook: The Just Bento Cookbook. In truth, I’d like to plug her book (because the recipes are good), but you can find most of the recipes, or an equivalent, on her Just Bento website, so if you’re an online recipe clipper, I’d stick with just using the site. If you’re a cookbook lover and specifically into bento, it’s a good book.

Personally, I find more of my recipes on her Just Hungry site, but when I’m looking for a recipe, it doesn’t really matter which site I go to, because no matter which one you’re on, the Search function searches both. Very convenient.

Maki-san also writes for an English-language newspaper in Japan, and she links to those articles on her site; if you’re interested in food and culture, they’re a fun read.

While I can make no claim that Maki-san is a fujoshi, she did earn points when she posted about the shounen-ai food manga, Kinou Nani Tabeta? by Yoshinaga Fumi (yes, Antique Bakery‘s mangaka). Here’s the beginning of Maki-san’s description:

Kinou Nani Tabeta? is about a 40-something gay couple: Shiro, a lawyer, and Kenji, a hairdresser. The stories mostly revolve around their domestic life, and each episode features Shiro, or occasionally someone else, planning out dinner and making it, with the recipes to go along. While I was initially drawn to this manga because of the food – the recipes are actually really good, mostly simple, practical Japanese home cooking – I also fell in love with the story itself. It’s one of the nicest depictions of an ordinary middle-aged couple who happen to be gay that I’ve seen anywhere. 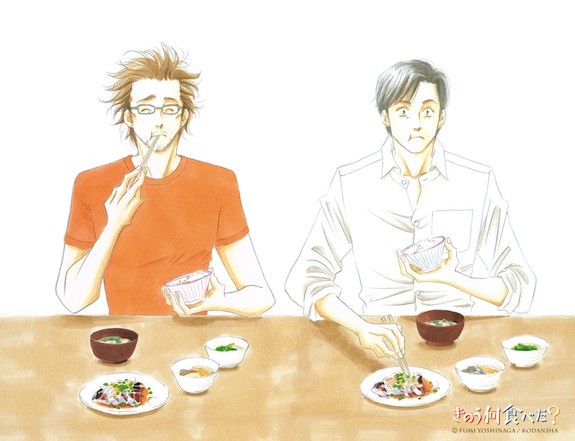 I have begun collecting these books. If you’re into cooking, Kinou Nani Tabeta? is a great read, because somewhere between half and three-quarters of the book is literally either planning to cook or actually cooking. If you can’t stand to hear a guy monologue about ingredients for ten pages, it’s not the book for you. Personally, I love it.

Oh wait, I was supposed to be talking about recipe websites. Darn it all, distracted by BL again.

Unlike the wide range of originally-English recipe sites online, Cookpad is a recipe website based in Japan. Used by Japanese (mostly) women. Tens of millions of them. And since the site was launched, they’ve amassed a collection of over 1 1/2 million recipes. Which does me exactly zero good, since I can’t read Japanese.

However, a few years ago, Cookpad launched an English version of their website. It currently contains more than 20,000 recipes translated from the original site, and 2,250 of those are in the traditional Japanese cuisine section. One side effect: the how-to cooking pictures are really fun (for someone who is kitchen obsessed), because you can see the pans, stoves, and other cooking implements that you wouldn’t generally find in Kansas, Dorothy.

The upside of Cookpad is that you get real recipes that real folks are making in Japan right now. In fact, the site claims that 80% of Japanese women in their 20’s and 30’s use Cookpad. The downside is that the recipes may sometimes call for ingredients not carried by the markets where you live. However, the site has a search function to help you find your closest Japanese grocery store, and I’m guessing that the recipes they’re choosing to translate are ones that don’t have too many difficult-to-obtain ingredients.

Overall, I love playing on Cookpad, because there’s a greater variety of Japanese recipes than you might find elsewhere; many sites (and cookbooks) just reproduce the “greatest hits” of Japanese cooking. Cookpad also serves as a good reminder that at home, Japanese cooks don’t just make “Japanese” food, and it can be entertaining to go through the rest of the site (the other 18,000 recipes) and take a look at Japanese twists on Italian, Indian, French and other world cuisines…

Nami-san has been running her blog since 2011, and she has a decent store of recipes built up. She grew up in Japan but now lives in San Francisco, so as another ex-pat, she is careful about using ingredients people are likely to be able to find outside of Japan. Nami-san writes well, doesn’t overcomplicate her recipes, and presents both the recipes themselves and the how-to’s so that they are easy to follow.

a blast from the past… Black Butler’s yaoi fanservice:

(Nothing, um, juicy is actually happening here, but the clip's whole point is to give ya' the wrong idea... Does that make it NSFW?)