Alright, I admit that video clip isn’t yaoi, sadly, but I can’t help using it — after all, a dish that can inspire this much enthusiasm, in both anime and yaoi manga, is worth trying out, right?

a curry of your own

I hope my first curry post convinced you that Japanese curry is a yaoi-proven recipe of happiness. At the very least, it’s a different enough curry experience to warrant at least one try. If you like curry spices and the texture of European sauces, of course.

Yes, I’m recommending that you make a curry “of your own” — because curry is marvelously flexible. Like it spicy? Add more peppers or cayenne. Don’t? Buy the mild curry paste or spice jar. Want it sweeter? You know how to make that happen, right? Sugar and honey are your friends. Want more than just potatoes, carrots, and onions for your veggies? Dump a few more in or switch some out. Avoiding red meat? Chicken or shrimp or tofu works just as well as beef… Take advantage of the recipes here, but make the curry that you want to eat.

Conveniently, curry only requires one special ingredient, and that’s the curry roux or powder itself. You have three main options: a store-bought curry roux in a box, a can of Japanese curry powder, S&B being the most famous version, or a curry powder mix you put together yourself. The third option is the least used, I imagine. Me, I’m fundamentally lazy at heart, so I figure there’s no need to go that far.

If you have an Asian grocery store available to you, it would be shocking not to find both the roux and S&B curry powder on the shelves. In my favorite local Asian grocery store, curry packets take up almost half an aisle. If your regular grocery store has a well-stocked international/ethnic foods aisle, you may even find Japanese curry there. Fortunately, even if you can’t find either locally, both can be ordered from Amazon and other online retailers, and the prices can be competitive with what you’d pay at a store.

Here’s a sliver of the curry selection at my favorite local Asian grocery store. If you click on the image to see the full size version, you can see the prices and some of the brand names more clearly: 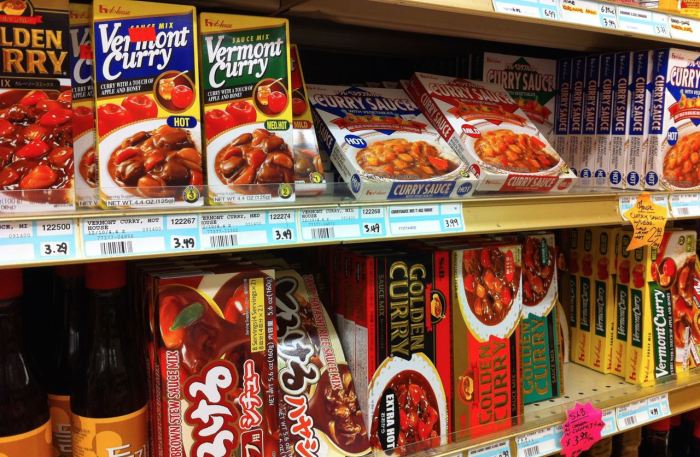 A soy note: one reader commented that she didn’t think she’d be able to try Japanese curry because she doesn’t eat soy, but for those of you who avoid soy, good news! Curry is one of the few Japanese dishes that doesn’t require soy sauce. Sure, you can put it in, and you might want to check the store-bought curry packets for soy, but a number of the recipes I’ve used don’t call for any soy at all. 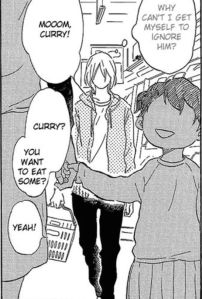 If you’re ready to jump in and whip up some yaoi-endorsed Japanese curry-of-seduction, here are three basic strategies, from simple to involved, largely depending on how many ingredients you include. Thankfully, curry doesn’t require fancy cooking techniques.

Instead of offering you a single recipe, I’ll point you to three of my favorite Japanese cooking websites’ curry pages, so you can pick the recipe that fits your mood and cooking inclinations.

As a bonus, most of these pages include either a video or pictures of curry-making, so for those of you who like recipe visuals, you’re in luck!

In the simplest version of Japanese curry, you pretty much just end up stewing beef, carrots, onions, and potatoes in water or broth and then adding a store-bought curry roux. Yes, that’s basically it.

A friend of mine mentioned once that she feels like she’s cheating when she uses the store-bought roux, but in many Japanese households, that’s how curry’s always made, so she’s actually being pretty authentic. If you want even more control over flavor, you can mix roux from different companies or spiciness. There, that feels more like cooking, doesn’t it?

If you follow this path, you’ll find that making curry isn’t quick, but it’s easy. Why isn’t it quick? Well, as mentioned above, it’s stew-like, so it simmers on the stove for anywhere from 30 minutes to an hour-ish, depending on how mushy you want your veggies and how melded you want your flavors. But during the simmer time, as long as you’ve got the temperature down at nice low level, you can busy yourself with other things (like finding out what the naughty seme’s gonna do next in that yaoi manga you just started).

Japanese Cooking 101’s curry recipe is exactly this basic, and it features a video that walks you through the curry making process. Even if you’re planning to make variation #2 or #3, below, watching this video provides a good orientation.

If you really want to cheat, some curry packs come with veggies included, as below, so you really only have to add the meat and steam some rice.

If the store-bought roux isn’t quite interesting enough for you, or if you feel like you aren’t getting enough vegetables in your diet, you can try the second main variation. Use a store-bought roux but increase the number of other ingredients for more complex and subtle flavoring and/or more variety in the veggies.

The Japanese 101 recipe above offers a bit of that, with its optional ingredients. However, the beef curry recipe on Just One Cookbook expands the recipe further, using the basic ingredients and a store-bought roux but also including mushrooms and a wide variety of additional flavoring ingredients. Personally, I’d also toss in some eggplant, but I’m pretty much always in favor of adding eggplant.

The third major variation is to make your own roux. This is good for people who, like me, can’t eat the ingredients in roux (which has MSG and gluten, for example) or just don’t like the flavor.

While using your own roux might sound like a big deal, if you find a decent recipe, it’s actually pretty easy, and some recipes let you make a big batch that you can store and also use in future curries. I don’t find it slows me down at all.

Maki’s curry recipe on Just Hungry features a homemade roux, but if you compare the whole recipe to the Just One Cookbook recipe above, it actually has fewer ingredients. So some people may actually find Maki’s recipe more approachable.

Also, as you may have noticed, the Just One Cookbook recipe above contains a link to a fairly easy homemade roux recipe that you can use to substitute for roux in any Japanese curry recipe.

The truth is that these three aren’t the only paths. Just the main ones. The curry recipe I use most often is a shrimp curry that comes from Hiroko Shimbo’s The Japanese Kitchen, and it doesn’t use a roux at all, just S&B curry powder.

However, it calls for quite a few ingredients, including an apple, a mango, brandy, and tomato puree. As I said above, Japanese curry is endlessly flexible. With all its ingredients, Ms. Shimbo’s recipe is more for those already addicted to Japanese curry, but if you end up addicted, I do recommend trying it.

I hope that you will be well-rewarded for your efforts, both with happy tastebuds of your own, and perhaps with the excited response of the one you’d most like to seduce.

8 thoughts on “yaoi curry — a seductive curry of your own”