Koi to Wana by Yamamoto Kotetsuko

hey baby, I’ve got some tasty curry at home… wanna come over? 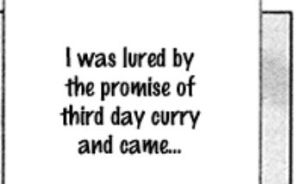 More than shoujo’s chocolate, in the world of yaoi, curry is an effective tool of seduction, a way to get into a man’s pants. Thus, it’s something yaoi taught me to love —after all, I always root for characters’ successful seductions. 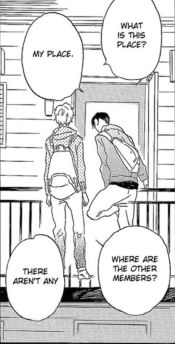 Before I read manga, I had never connected curry and Japan. Until I read yaoi, it had never occurred to me that curry might be popular enough to lure a man into another man’s bed. Well, into his apartment — the first step to getting him into bed…

But as they say, food is the quickest way to a man’s heart (they may be old-fashioned and sexist, but in yaoi we have men cooking for men, so in this one instance I’ll let the implicit sexism slide).

The first time I saw curry used as a lure, I thought how popular curry must be, that it could convince a conflicted young man to give up his plan to give up the boy he liked and instead follow him home… And, as you can see to the left and right (or above, depending on the size of your browser window), a fictional curry club was a perfectly effective lure in Kare no Barairo no Jinsei.

Beyond curry’s strategic use as bait, apparently just eating it in public can draw the interest of a straight boy and turn him to the yaoi dark side:

Japanese curry, I thought, must be a very powerful dish, indeed. 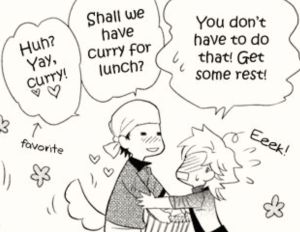 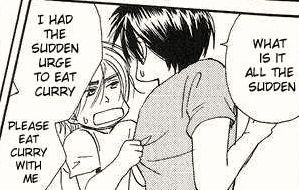 Gekkou no Rankan ni Kuchinashi no Nioi by Takaku Shouko

As I continued to read yaoi, manga after manga flowed by, with characters demanding curry from their lovers or practically dancing with joy when their lovers offered to make them curry — their favorite dish —  for dinner. Over time, I became more and more fascinated with the power of curry in yaoi.

What about you? When you started reading manga (those of you who first experienced Japanese culture through manga/anime), do you remember being surprised at how excited characters get about eating curry?

The more I read and the more boys talked about, craved, cooked, and ate curry, the more curious I became about this unknown animal: the curry of Japan. Having seen it lead more than one young man down the yaoi path, I wanted to know more about Japanese curry, a comfort food with seductive powers.

When I finally saw characters discussing putting apples in their curry and breaking off squares of curry paste from something that looked like a chocolate bar, my suspicions were confirmed — the curry of yaoi, of manga in general, wasn’t the Indian curry I know. 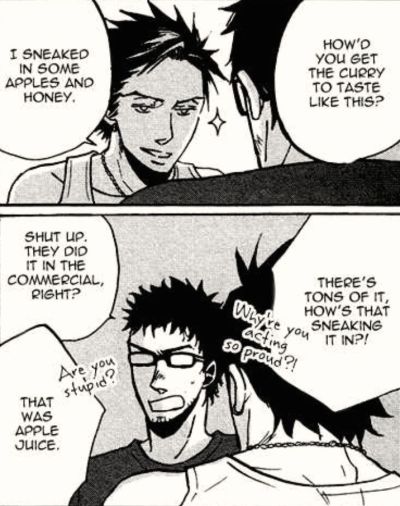 And so I researched in cookbooks, googled, and subjected my kitchen to some remarkably aromatic experiments. As it turns out, Japanese curry is fairly easy to make, sweeter than Indian curry, thickened with a flour-based roux (like a French sauce), and less likely than Indian curry to be fiery hot.

the manliness of spicy curry 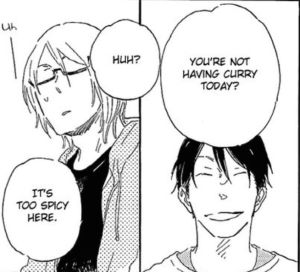 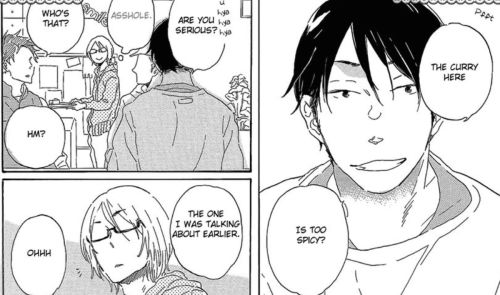 Above, that’s the seme laughing at the rather feminine uke for not liking his curry spicy, while in the manga below below, the uke, who’s generally rough and manly (except for his pretty face), wishes his mom and sisters would put more hot peppers in. Yep, both ukes, but the manlier one likes his curry with a kick. 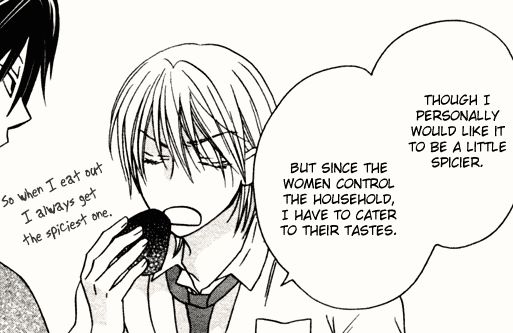 In any case, yaoi characters tend to discuss whether they like their curry spicy or not, and even if a not-spicy-loving yaoi boy gets teased for his wimpiness, his lover usually ends up demonstrating his love by cooking milder curry. 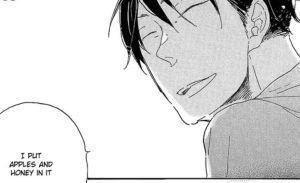 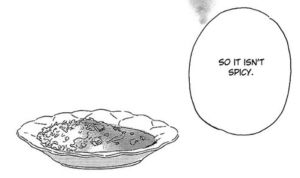 Japanese curry, only indirectly from India

While Indian food is eaten in Japan, Japanese curry (pronounced ka-re) is only a distant cousin, having been busily mutating across multiple continents for more than a hundred years. 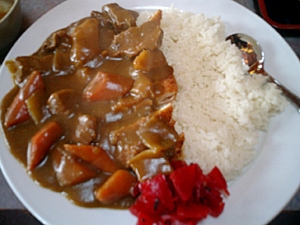 Apparently, curry came to Japan in the mid-to-late 1800’s, via those globe-trotting British, making it a Japanese interpretation of an English interpretation of an Indian food. So it’s not really surprising that Japanese curry is stew-like and glossy from being thickened with flour: it journeyed through 19th Century British cuisine before it landed on Japan’s shores.

Thus, while Japanese curry’s spices have much in common with Indian curry, the rest of the dish has more of an English pub feel to it. It’s a bit like Indian curry meets the filling of a gravy-heavy beef pot pie before being gently sweetened and landing gracefully atop your plateful of rice (with a side of Japanese pickles). Perhaps that doesn’t sound sexy. Frankly, it doesn’t to me. Nor does the resulting dish really look all that sexy. Yet, I didn’t grow up in Japan (or in a yaoi manga), so maybe the fault lies with me.

The iconic Japanese curry features beef, potatoes, onions, and carrots as its principal ingredients, although endless variations abound. I still drool when I remember a character mentioning that he had added eggplant to his spicy chicken curry. Mmmmmm, eggplant. 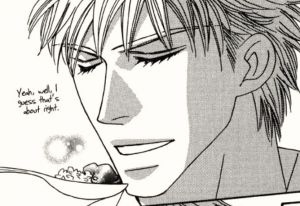 And as you can see, like other Western stews, Japanese curry’s eaten with a spoon, so if you have chopstick-phobia, it’s an ideal Japanese dish for you.

many forms of Japanese curry

While the standard plate of curry-over-rice is the one that seems to hold seductive power in yaoi, curry flavor in Japan is popular in a dizzying variety of forms, from curry rice to curry udon to curry bread, dry curry, curry with fried pork cutlet on top, curry soup… so many variations that it’s satirized in one yaoi manga: 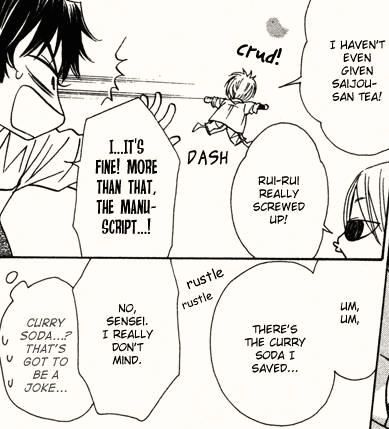 Actually, given that I once braved a Japanese garlic and hot chili pepper soda (and, no, that soda should never have been born), maybe curry soda really does exist. Frightening thought… but I digress.

should you try making your own Japanese curry seduction? 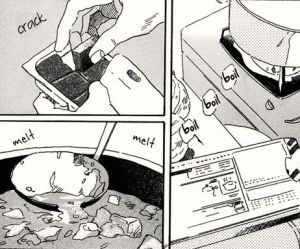 Yes. Definitely, yes! If you have even the tiniest liking for the spices in Indian curry, I encourage you to play with Japanese curry. Granted, outside of Japan, perhaps its powers of seduction will be diluted, but it’s worth a try, right?

Fortunately, curry cooking’s a fairly easy proposition. While curry requires a chunk of time on the stove, simmering its way to delicious stew-ness, the actual making of Japanese curry requires little culinary skill. Why? Because it’s almost never made from scratch. Most of the curry flavor comes from a box.

With your main ingredients (typically a sliced/chopped up meat and vegetable combo) and a pack of curry mix packets from the grocery store, you’re good to go.

If you need to feel that you’re producing a more personalized curry, you can mix more than one commercial curry flavor to create a unique curry of your own by dropping in cubes from multiple flavor packs (which, these days, can even be ordered on Amazon). This strategy is also mentioned in yaoi: 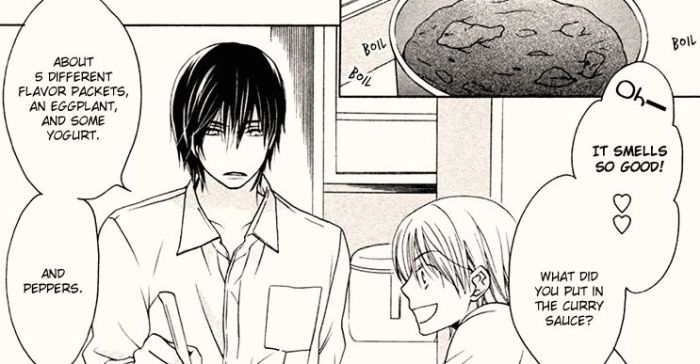 Japanese curry can, of course be made from scratch and can be made as complex as you like. There are many recipes online with a stunning variety of ingredients, spices and condiments for adding yet more depth to your curry’s flavor. One of the recipes I use includes ketchup, while another calls for mango chutney. 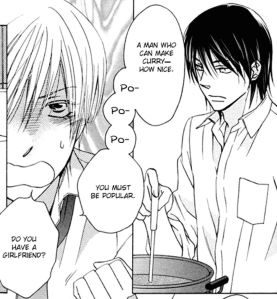 However, home cooks in Japan seem to mostly rely on the store-bought curry packs, whether alone or in combination, so it’s perfectly “authentic” to follow that simple, straightforward path.

Want to learn a bit more about Japanese curry, its variations, and the three main ways to make it? Ready to try your hand at making Japanese curry, whether you follow the simple or complex path? Then please do join me in my upcoming post: curry and yaoi — a seductive curry of your own.

Perhaps you, too, may discover the power of curry, beyond comfort food, a dish to lure a lover home with you…

After all, apparently being able to make curry will make you po-po-popular…

5 thoughts on “curry and yaoi – the comfort food of seduction” 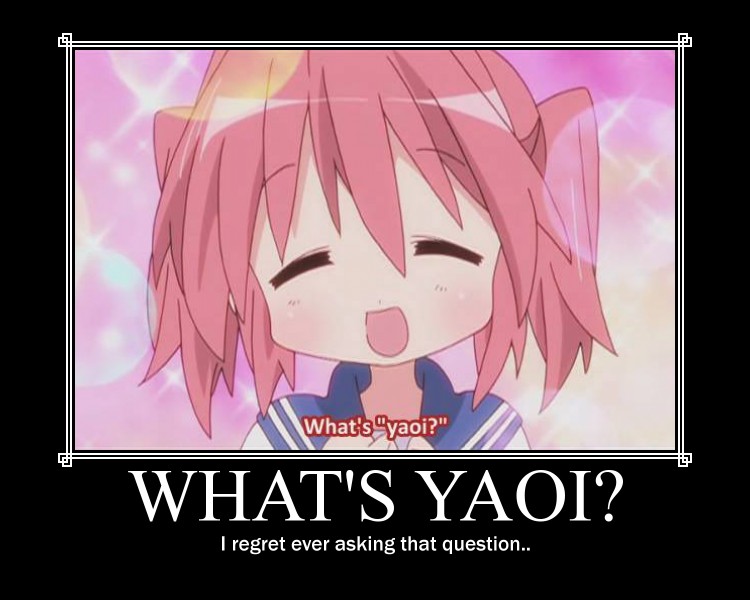